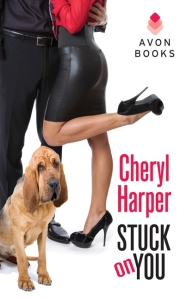 Let’s meet Misty! (She’s been a blog stop, but here’s a little fact you did not know…just between us…the first time I saw the cover, the doggy model was very clearly not a girl. Photoshop works wonders!) Misty’s pretty important at the hotel, especially in the next book.

Fresh start, KT. Make a fresh start. “I was having a really bad day yesterday. When that happens, I get short tempered. And I make dumb mistakes like taking my problems out on other people.”

Laura leaned against the counter with a sigh. “Yeah, I get that. I might be guilty of it too.”

KT frowned. “Okay, moving along. Could I get a soda and whatever you have that’s close to a club sandwich?”

Laura tapped her pen on the menu in front of him. “We have choices. Don’t you want to check out the menu?”

She picked it up and slid it under the counter. “Fine. You want fries or chips?”

“Fries.” He slid out the bulging folder of paperwork he carried everywhere. It was getting to the point that he secretly hoped to lose it somewhere. The consequences might be rough but he hated it with a burning hot passion. Once he made it out of this, he was never going to volunteer for a job that required spreadsheets ever again. “And a Coke.”

“Yeah, that part I remember.” Her lips twitched as she met his stare. “Oh, what I meant was, yes, sir. Of course, sir. Excellent choice, Mr. Masters.” She turned to walk down to the window to turn in the order. He watched her efficiently fill a glass and wondered how many places in the world he could get a drink made by the world’s shortest and most sarcastic showgirl. She had a smart mouth. He wanted to kiss it.

When she quickly, and it looked like subconsciously, shifted the halter to bring the low neck up and then tugged on her skirt to bring it down, he decided she probably hadn’t dreamed of a life in the showgirl spotlight. She looked a little bit like a teacher. As always, when he met new people, he had an entire backstory created before he really had a name memorized, and he was intrigued by her story.

He glanced around the nearly empty bar again but just as he heard her plop the glass down on the bar in front of him, he saw a dog in the doorway. He was long and lean, with tan fur and dark markings around his droopy eyes. Two long, floppy dark brown ears seemed to be melting from his head. He sat perfectly still, like he was waiting for the hostess to seat him at the next available table.

He turned to Laura. “I’m not hallucinating, right? You see that ugly dog in the doorway too?” He pulled out his phone, snapped a picture, and tweeted it with the caption: Please wait to be seated.

She whistled. “I would not say that if I were you. Willodean hears it and you may find yourself without a place to sleep tonight.”

He laughed. “So he’s hers, huh? That doesn’t really surprise me.”

“Yeah, okay, something else you should know. You may not be able to see the tiny green bows on the ears from where you’re sitting, but that beautiful, purebred bloodhound is named Misty. She’s a she and takes any slight to her femininity personally.”

KT tilted his head as he looked at Laura and tried to guess whether or not she was serious. The look on her face said she meant every word and, even better, knew how ridiculous it sounded, but he knew telling tall tales to outsiders was a Southern tradition. He didn’t know whether to hope it was all true or just a way to pull his leg. He heard a whistle and Misty the bloodhound trotted off before he could make up his mind about the chances of the little green bows being real.